Dyslexia In The Prison Population

This is the year that the American prison population topped its own record at 2 million inmates. That fact is both costly and sad. It costs about $35,000 per year to keep an individual in prison. Few inmates would describe themselves as happy, and the majority can’t read adequately.
We could prevent so many people from landing in prison if we would first examine the education they receive (or don’t receive) early on. More precisely, we must insure that all children learn how to read. We need to re-design the early education of those who do not respond to routine reading instruction because of an inborn condition called dyslexia.
While the prevalence of dyslexia in the general population is about 20%, the prevalence of dyslexia in prisoners is more than twice that, or 48% according to a scientific study my colleagues and I, conducted at the University of Texas Medical Branch in conjunction with the Texas Department of Criminal Justice (published 2000).
But treatments for the condition are now well known and should be integrated into the childhood education of individuals with dyslexia BEFORE they have a chance to fail and be stigmatized by a condition for which they are not at all responsible. If that window of opportunity passes, and the individual drops out of school or winds up in prison, as many do.
Dyslexia is not just another disability, especially not in a world so extensively based on being able to read. As experts have pointed out, if you can’t read, you can’t make it in life. Lots of young people aren’t making it.
Suffering because of dyslexia occurs not only in grade school and every later experience in education, but also in nearly all aspects of commerce, government and most other components of modern life. People who can’t read are ashamed to be discovered, not least because they might lose their job and be stigmatized for future employment.
Being unable to read is so embarrassing that it is carefully concealed, sometimes with incredible ingenuity and persistent vigilance. Paradoxically, there have been in recent times several widely publicized “coming out of the closet” cases by immensely successful businessmen in their 6th and 7th decades of life who chose to reveal their dyslexia, apparently to raise public awareness of the problem they faced and how they coped with it.
In the past, being unable to read was not always shaming or demoralizing. Before printing was made easy by Johannes Gutenberg’s revolutionary invention of printing with moveable type, the tedium was practiced almost exclusively in scriptoria of religious institutions or by private scribes for royalty and other wealthy citizens; understandably there were few books, they were expensive and their use was regulated. The masses were not expected to read and often were discouraged from trying or even punished when found out trying.
The immense value of Gutenberg’s printing press was quickly recognized all over the world and within a very few years books became more available. The innovation led to massive transformation of society. Princes of the church and of royalty were no longer among the few who could read, learn, think and know the content of books which had often been secret and sometimes even used to subdue the masses.
But although printing and reading swept much of the so-called advanced civilizations of the world, it also introduced a new form of disadvantage for those who couldn’t learn to read, preferring their old methods of communication and structuring their social and community lives and livelihood around communication which did not require reading.
In 21st Century America reading is essential. Those who don’t read adequately fall behind or fall out of school. They are called, unfairly, “dumb, stupid or lazy.” All too often they end up in prison because they don’t “fit” with the school.
We know plenty about dyslexia and the teaching of reading to those who have dyslexia. The correct use and application of this knowledge could reduce the prison population as well as our tax bills, while doing the humane deed of enriching lives of learners. #
Dr. Kathryn Currier Moody was director of the dyslexia program and member of the Department of Neurology at the University of Texas Medical Branch at Galveston while she served as principal investigator of the dyslexia study in Texas prisons (2000). For a reprint of the published study contact Dr. Moody at katem7@optonline.net.
Posted by Dr. Mohd Anuar Abdullah at 10:21 PTG Tiada ulasan: 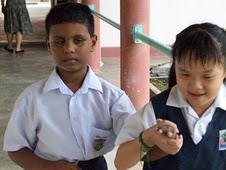